Following the referendum vote in 2016, the UK officially left the European Union (EU) on 31st  January 2020 going through a transition period that came to an end on 31st Dec, 2020. This process is commonly known as Brexit (British exit).

Since 1st January 2021 new rules have come into force.

For example, following Brexit, businesses that import and export to EU countries now must deal with customs borders with EU countries. Customs tariffs might be due on imports or applied to exports by the recipient country. And the way VAT is accounted for with regard to imports from all countries has changed.

These new laws and regulations are intended to limit disruption and to allow businesses to continue as smoothly as they can now the transition period has ended.

There are likely to be more new laws and regulations over the coming years as the relationship with the EU is consolidated but this guide is intended to help businesses today by providing a high-level overview of key Brexit adaptations for most UK businesses.

The UK has a customs border with EU countries, with full customs controls. Additionally, the UK and EU now trade under a unique free trade agreement.

A business task that was formerly comparatively straightforward, such as bringing goods into the UK from France or Germany, has become more complex.

Customs and excise duty might be payable on imports, as well as VAT (see ‘Getting VAT Right’ in the next section).

With a customs border now existing between the EU and UK (except for Northern Ireland and Ireland), moving goods between the UK and EU is now considered importing and exporting.

To allow for a period of adjustment, the UK government has made allowances – some permanent, some temporary – that mean businesses aren’t faced with a sudden strain on their admin resources when it comes to customs and VAT processes, or overwhelming cash flow requirements.

From an administrative point of view, this will involve customs declarations, and requires understanding of previously arcane knowledge such as commodity codes and customs procedure codes. The basics are as follows:

An Overview on Importing

Customs import processes are discussed in more detail later (see “Deferred customs declarations and simplified declarations for imports”) but, as mentioned, customs and excise duties might be payable on imports into the UK from the EU.

You can make use of existing simplified import measures to reduce the administrative requirements.

As well as potentially applying to imports from EU countries, it also applies to all imports from countries for which the UK does not yet have a trade agreement, which currently includes one of the UK’s largest trading partners – the US. You can check the tariff for an import using the government website’s look-up tool.

Furthermore, you may need to apply for licences to import certain goods into the UK, and some goods might require an inspection fee be paid.

An Overview on Exporting

Many businesses exporting to the EU from 1 January 2021 use the simplified declaration procedure, although this can only be used for certain kinds of exported goods.

You can also simplify export paperwork requirements using the entry in declarant’s records (EIDR) procedure, although this only applies to goods that don’t need a pre-departure declaration.

Note that simplified declarations and entry in declarant’s records both require you apply to HMRC, and to be authorised before using them.

(Please view our whitepaper for a more detailed breakdown of the new importing and exporting requirements).

Getting Tax Right after Brexit

The way VAT is dealt with for importing and exporting has changed for anyone who carries out these tasks with businesses or individuals in EU countries.

Notably, the outcome for businesses remains largely the same as before the end of the Brexit transition period, thanks to measures the government has put in place. There should be negligible cash flow impact. But the administrative requirements have changed because of the new postponed VAT system.

Please view our ‘Business After Brexit’ whitepaper for a breakdown of:

Business Travel to the EU after Brexit

If you’re travelling to the EU on business, there are a number of things to be aware of, covering the likes of passports, visas and travel insurance. 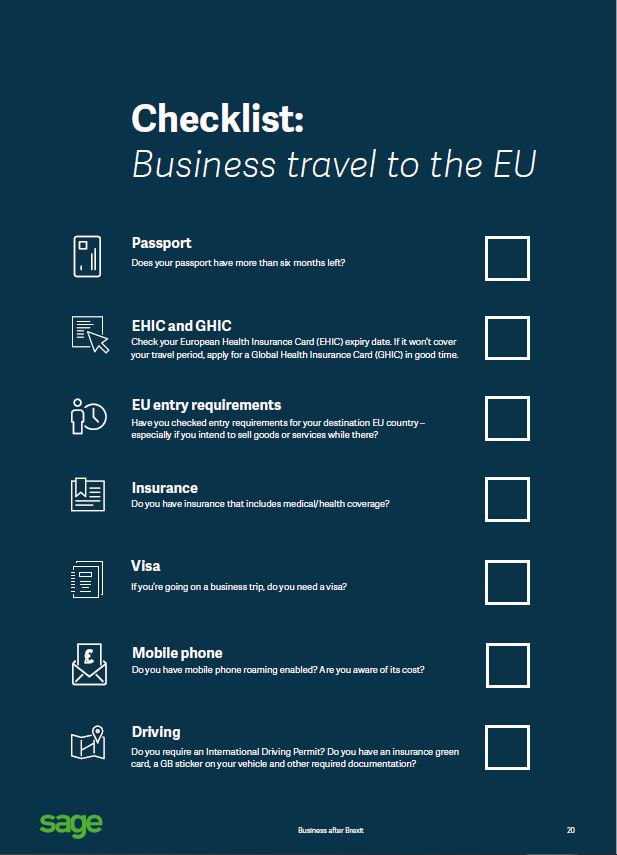 What you need to know about data protection…

While the GDPR is implemented in UK law, there are a few things to be

aware of around data transfers between the UK and EU.

The UK is hoping to become a ‘favoured nation’ via an ‘adequacy decision’ on behalf of the EU, which should facilitate the free transfer of personal data without the need to implement additional safeguards.

Before the end of June 2021, a bridging mechanism means that the UK and EU continued to facilitate the free flow of data under the GDPR’s terms. If an adequacy decision is reached, nothing will change.

Despite some feeling that our exit from the EU is detrimental (especially regarding business) there are fresh opportunities for companies, and a need to think creatively, to be prepared to harness the advantages brought by change. Above all, businesses need to act now. Businesses need to make real and permanent changes to areas such as VAT accounting, and customs declarations.

Additionally, there’s a need to continue this attitude and approach in the coming years. The coming decade is likely to see an ongoing requirement to adapt and evolve as the UK government fully rolls out the new laws and regulations that affect trade with our EU neighbours, and as businesses in the UK adapt both culturally and professionally.

For a more detailed version of the above information, and checklists of everything you may need to be successful in business after Brexit, download this whitepaper.